During my lifetime I have witnessed much societal change, some good and some bad, but none so profoundly rooted in ignorance than some people’s belief, that they have the right to censor or eliminates another’s right to speak freely. We witness on a daily basis groups demanding and receiving apologies and redress for words that they find offensive, yet in actuality are merely points of view in dissent with their own. Once again must I point out, that there is no right to live your life free of offense, but there is a right to free speech. This right is the 1st Amendment because of its necessity and importance, without it the populace is crippled from pointing out flaws in society and government. When freedom of speech is threatened, it will not disappear, it will not be eradicated or silenced. It will simply be driven underground, in simple ways at first, clandestine meetings of freedom fighting minds and political actions. If no progress can be made through the system and diplomacy, then these men & women who seek nothing but what is rightfully theirs will be forced to exercise another and equally important right, the 2nd amendment, right to bear arms, against a domestic threat to freedom. Then shall these freedom fighters rise again holding the tattered remains of a Constitution too many times ignored, demanding then that the tyrants be banished forever from our sight, and shaking awake the apathetic, lethargic, ignorant and cowardly people so easily subjugated. Freedom shall once again ring, loud and true. ~ Nick P

The main problem with the Phil Robertson vs. A&E issue is that it is really not a constitutional freedom of speech issue, but it certainly is a free speech issue. These free market corporations are so afraid of the threats and extortion by the radical special interest groups that claim representation and leadership of any who cry victimhood or disenfranchisement from the rest of society. 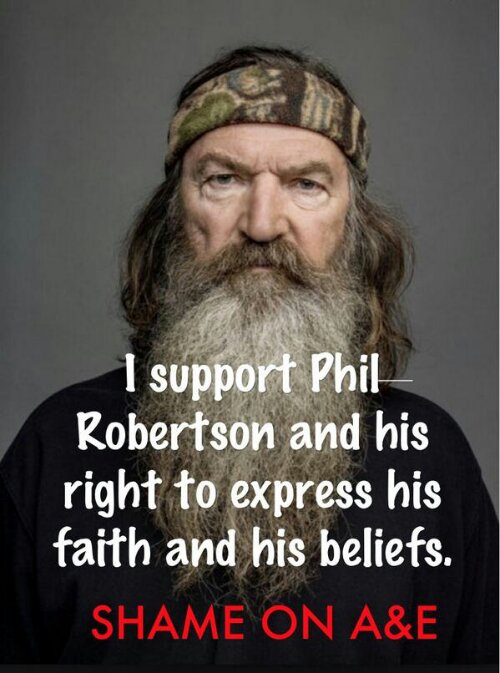 The only way to end this is to maintain consistency with regards to all speech, Including that which we find most repugnant. We can allow no taboos or restricted speech, to do so may protect the feelings of some, but it does nothing to promote our continuance as a free people. When faced with these corporations, their cowardly execs,high priced lawyers, and knee jerk pandering reactions in response to the manufactured outrage of a few, the answer is boycott. We must take the time out of our busy lives to make phone calls, write letters and emails, making them aware of our intentions, if folks like Phil Robertson and countless other Americans are persecuted for their opinions. A show of commitment and a wielding of righteous power to show them we mean business. The necessity to protect all speech and expression regardless of how it makes us feel is one of the most important duties that we as Americans must shoulder, for if we do not, all freedoms will surely be lost.
~ Nick Pensabene